Kihon: The Heart of an Infinite Circle

April 28, 2011
I'm sure you've all studied kihon happo. But it's one thing to study those eight basic fundamentals and a entirely different thing to study the kihon OF the happo. Hatsumi Sensei says this idea can be expressed very simply with a common Zen symbol of Enso which I will share below, but what will it mean to us?

Sensei has said that the word happo suggests infinity. He said that placing the number eight on its side gives us that symbol ∞. Soke goes on to explain that a technique does not have a beginning or end but just flows one into the other like the symbol.

A simple way to consider this is with tai sabaki. In angling we often start with cardinal points for evasion or striking (please excuse my clumsy finger diagrams):

Then we split those four directions to make 8:

You can see how it begins to get infinite... especially if you add the up and down directions so any angle in space is possible leading to a sphere:

Or the Japanese Zen symbol of Enso:

Hatsumi Sensei says that kihon is like thrusting your sword into a point about which there is an Enso or limitless circle (happo) and existing in the space is the kukan. 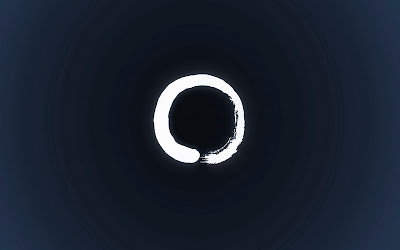 If you want a clue to the study of that infinite space, you may read the calligraphy of the first Enso I posted at the top of this post by Isan Shinko. In the center is the character for heart, which you may recognize as part of our 忍 "nin" symbol. And the calligraphy says,

"Keep yourself firmly centered inside here and nothing will be able to shatter you. "

If you subscribe to my training notes (if you aren't a subscriber yet, you miss a LOT of free Bujinkan notes), you can get even more of these ideas that Hatsumi Sensei shares during my classes with him.

October 28, 2010
photo by ajari This last year, some of us have heard Hatsumi Sensei make reference to a spider's web dangling down from heaven.  As usual with Soke, there are many layers to this idea.  If you subscribe to my training notes (if you aren't a subscriber yet, you miss a LOT of free Bujinkan notes), you can get even more details from my classes with Hatsumi Sensei. One idea that Sensei put out there for us was in his painting of Daruma with a spider descending a web and alighting on Daruma's eyebrow.  As Paul Masse explains: The Inscription reads, “ Ninjustu is on your eyebrow.... the spider`s thread, so close, the village of Togakure”.  Sometimes things are so close to us that we can not perceive them. Hatsumi Sensei has continued to reference this web from the heavens.  If Ninjutsu is on one's eyebrow, or there is a thread to heaven dangling down but we do not see it, how can we use that in Budo? Maybe it will help if we look at another story that Hatsumi
1 comment
Read more

April 25, 2019
山田 記央 photo by Michael Glenn It was the normal chaos at the Bujinkan Honbu dojo. The training had just ended, and everyone rushed to get their photos with Hatsumi Sensei. I rushed to my notebook. I did this because Soke finished the class with a huge surprise for his teaching of 無刀捕 mutōdori. He showed us 空間を作る kūkan o tsukuru, or how to create space. So I scribbled a note about the hidden location for this opening before that secret disappeared into the night. Earlier that day, I had gone into Tokyo to visit Norio Yamada-san. He makes 江戸手描提灯 Edo Tegaki Chōchin, Edo style hand painted paper lanterns. He called to say my order was ready to pick up. It never occurred to me that there could be a connection to Soke’s teaching later that night. Hatsumi Sensei said, “You’re not evading, 空間  浮かす Kūkan ukasu, you’re floating the opponent in the space.” If you’ve ever held one of these paper lanterns, they feel like you’ve caught light and air itself as it glows softly in the nigh
Post a Comment
Read more